This is absolutely our most local sportive, and in aid of a local charity, but somehow I’ve never actually taken part before. They offer several distances and I had vaguely thought about doing the new longest 63 mile route they added this year if any of my cycling buddies had been up for it… but everyone was washing their hair, or their bikes, or something. I’d mentioned to Kitty that there was a 5 mile route, just a bit longer than she’s ever cycled before. At the last minute, she announced she would like to do it, so off we went. There were still one or two parking spaces left at Down Grange, and registration was still open, so we got our numbers, 1118 and 1119, just as the rest of the 5 milers set off. The start times for the different distances are staggered, with the longer rides starting earlier. Setting off a few minutes behind everyone else, it was nice that we were able to go entirely at our own pace. The route was well signed and marshalled and once we got through the Pack Lane traffic lights and were able to turn onto the path that runs between Kempshott and the open fields, I could relax!

The clouds drizzled on us very briefly, but mostly the sun shone. Five miles was about right this year. Kitty did really well and was excited about her medal and water bottle and the rest of her goody bag. Next year, she says maybe we’ll have a go at the 18 mile route!! 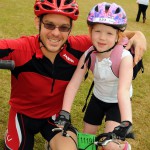 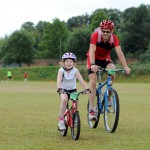 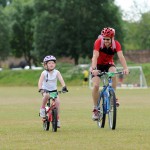